Release v1.3. November 2015 – Added homographies for each camera (projection from the camera image to the ground plane).

Maintained by Alexandre Bernardino (alex at isr ist utl pt). Contact me if you are interested in this dataset.

The HDA dataset is a multi-camera high-resolution image sequence dataset for research on high-definition surveillance. 18 cameras (including VGA, HD and Full HD resolution) were recorded simultaneously during 30 minutes in a typical indoor office scenario at a busy hour (lunch time) involving more than 80 persons. In the current release (v1.1), 13 cameras have been fully labeled.

The venue spans three floors of the Institute for Systems and Robotics (ISR-Lisbon) facilities. The following pictures show the placement of the cameras. The 18 recorded cameras are identified with a small red circle. The 13 cameras with a coloured view field have been fully labeled in the current release (v1.1).

Each frame is labeled with the bounding boxes tightly adjusted to the visible body of the persons, the unique identification of each person, and flag bits indicating occlusion and crowd:

The following figures show examples of labeled frames: (a) an unoccluded person; (b) two occluded people; (c) a crowd with three people in front.

For each camera we provide the .jpg frames sequentially numbered and a .txt file containing the annotations according to the “video bounding box” (vbb) format defined in the Caltech Pedestrian Detection Database. Also on this site there are tools to visualise the annotations overlapped on the image frames.

We maintain a public repository of re-identification results in this dataset. Send us your CMC curve to be uploaded  (alex at isr ist utl pt).
Click here to see the full list and detailed experiments. 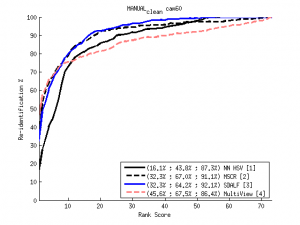 We thank all the anonymous persons who were caught in the recordings and authorised the use of their images for scientific research purposes.